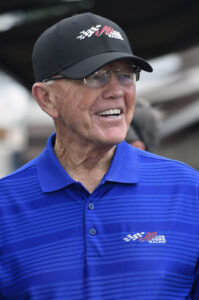 CONCORD, N.C. — The North Carolina Motorsports Association will honor NASCAR Hall of Fame championship team owner and Pro Football Hall of Fame football coach Joe Gibbs with the Achievement in Motorsports Tribute Award during its 15th NC Motorsports Industry Awards Ceremony. The annual gala, which did not take place in 2021 due to the pandemic, is scheduled for January 25 at Embassy Suites Ballroom in Concord.

“We are so glad to be back and host this prestigious event for our industry in 2022,” said NCMA Chairman Greg Fornelli. “We are thrilled to have the opportunity to honor Joe Gibbs with the Achievement in Motorsports Tribute award on our biggest night. Gibbs and his family have built JGR into one of the strongest NASCAR teams in history. He is a born leader, and he’s proven that over and over again on the football field and the race track.”

Gibbs is the only person to be elected to both the Pro Football Hall of Fame (1996) and the NASCAR Hall of Fame (2020). Since its inception in 1992, Joe Gibbs Racing has accumulated more than 375 NASCAR victories across the three premier series including four Daytona 500, five NASCAR Cup Series championships and six NASCAR Xfinity Series titles. The team has two National Hot Rod Association Pro Stock championships and 33 national event victories during its six-year stint in NHRA competition. The team has also competed in AMA motocross and supercross, closing the JGRMX team at the end of 2020 season.

Gibbs was the head coach of the Washington Football Team from 1981 through 1992, winning three Super Bowls. He returned to the team in 2004 and coached through the 2007 season leading the team back to the playoffs in two of the four seasons. In 2019, Gibbs was named to the NFL’s 100 All-time Team as one of the 10 best football coaches of all-time.

In addition to Gibbs, NCMA will honor longtime NASCAR broadcaster and former crew chief Larry McReynolds with the Jim Hunter Memorial Media Award. The ceremony will also recognize companies that have made significant contributions to the motorsports industry in North Carolina.

Tickets for the gala will be on sale soon.

For Email Newsletters you can trust